Huston - we have a problem!

For a man in charge of a newspaper facing its sixth week of indefinite all-out strike action by almost the entire journalistic staff, it’s nice to know what the "innovative and charismatic" South Yorkshire Newspapers MD John Bills' main priorities are.
Fresh from the embarrassment of revelations that he paid his own son to sit in the Doncaster editorial office slagging off the papers he runs on facebook, and publicity over his ludicrous Linked-In profile text, we can now reveal that Mr Bills has sent his first formal communication to the NUJ since the beginning of strike action all those weeks ago on July 15.
An invitation to negotiate perhaps? An acknowledgement of the genuine and heartfelt concerns of his loyal and hardworking staff?
No. Not a chance.
Instead, Mr Bills has broken his self-enforced public silence to chastise the NUJ over a leaflet (posted right and below) circulated at the Doncaster Rovers football ground critical of South Yorkshire Newspapers editor-in-chief Graeme Huston.
Better still, Bills shares with us the knowledge that poor old Mr Huston was sent a copy of the leaflet with a “derogatory note” attached as he manned a lonely editorial office last week with only a handful of scabs for company.
You can see Bills' letter to the NUJ here.
The leaflet detailed Huston’s decision to lay off the well-respected long-serving Doncaster Free Press Sports Editor Peter Catt.
Whilst clearly satirical, the leaflet was not factually incorrect in any way - my colleague Chris Morley said to Bills in response: "It appears to me that the material is both accurate and fair comment.".
It is very telling that Bills has chosen not to write to the NUJ for any other purpose than to defend the self-described “third most important man in Doncaster” from some gentle ribbing.
Huston has presided over a huge decrease in circulation at the Free Press during his time at the helm. From my own observation as a union officer servicing the strike, it is very clear to me that it is opposition to Huston’s management style that has united the NUJ Doncaster chapel. It is a strong unity that has lasted longer than virtually any industrial action in recent domestic history.
Yet still, all Bills seems to do is defend his manager from some honest satire and continue repeating the mantra that he will only talk to the NUJ when members return to work.
In my experience, any boss with sense would have opened up negotiations and would have got the members back to work by now and been able to call it a draw. But Bills is different. He is actually making more moves to inflame and entrench positions to ensure this damaging dispute continues into the distance.
It is a mark of the arrogant and pathetic Johnston Press approach that they would sit back and destroy their own papers rather than admit they might have been slightly wrong or change their management approach one iota.
Still, it is heartening to know that after weeks of principled serious campaigning and protesting, the weapon that has finally succeeded in bringing the management heads out of the sand is the simple weapon of mockery. If that’s what forces them to talk - then there is a lot more of it to come.
Text of Bill's letter to NUJ:
Dear Chris
We bring to your attention the enclosed leaflet which we understand is being distributed by your members who are currently out on strike action.  A copy of this was sent personally to Graeme Huston with a derogatory note included.
It must be stressed that actions of this nature are not acceptable and I am sure that you are as disappointed as I am that this literature is being circulated.
I trust that the NUJ does not condone this literature and type of behaviour. I would ask that you remind your members of their responsibilities and code of practice whilst taking part in industrial action
Yours sincerely
John Bills
Managing Director
Chris Morley's response:
Dear John
Thank you for sending on a copy of the leaflet "The Man Who Kicked the Catt" and your letter dated yesterday.
It appears to me that the material is both accurate and fair comment. It is also presenting important news to the people of the town that has been withheld from the pages of the Doncaster Free Press during the strike.
I suggest that if the story of Peter Catt's dismissal had been properly reported in the DFP, then derogatory comments about the prime mover would have come to your offices directly.
As you know, the actions of the company in targeting talented journalists who were known by management as leading members of the NUJ chapel has angered my members so much they are on indefinite strike. Denying them the chance to bring about a satisfactory settlement of the dispute by your refusal to hold talks without withdrawal of the action, can only increase my members' determination to hold management to account.
Instead of asking me to repudiate the actions of my members, I suggest you instead ask me for my availability to hold talks to resolve the dispute. I am happy to do this at any time.
Yours sincerely
Chris
Back of "Who Kicked the Catt" leaflet: 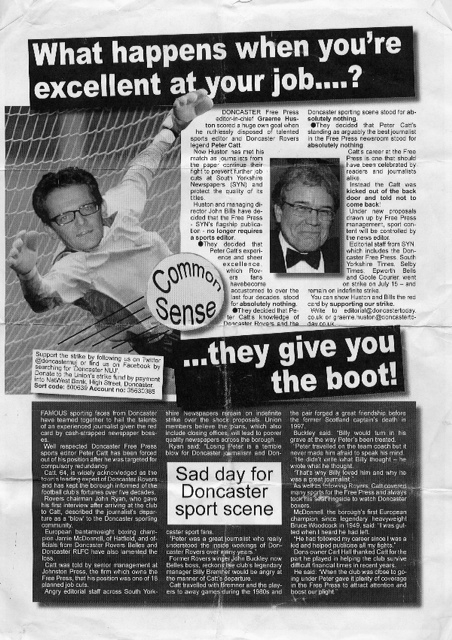 Exactly how different, I fear the staff at Doncaster are in the middle of finding out.

A man whose own personal mantra appears to be the provocative American management acronym "FiFo" - Fit in or F*ck off.

Do football fans in the town who didnt attend the match know about this man's dismissal? If not I'd tactfully suggest that the NUJ make some moves in that direction. Maybe they won't be best pleased? Just a thought...

Fitting tribute if you ask me. Johnston Press have been scoring own goals for a very long time. Thank God I'm no longer with that company.

As for the happy, smiling geezer in the poster, Huston. He should count himself lucky that he has so little to complain about.

Back when my place was on strike, we flooded boss man with pizza deliveries, taxis in the wee small hours and much else besides.

We send our support by the bucket load but please this has to end..we want our friendly paper back, one we all love and reply on so dearly.

Johnson press be careful, us advertisers are growing more and more uncomfortable with you. Sort this and sort it now!