Ever wondered what the strike breakers are thinking? Now we know...

I have often wondered what goes through the mind of people who willingly and openly cross trade union picket lines to replace striking staff.

Now, thanks to the miracle of social media and a lax attitude to privacy settings, the 24 NUJ members about to enter their fourth week of indefinite strike action against South Yorkshire Newspapers group now know what the scabs are thinking and saying.
Fresh from being hauled over the coals for using 16-year-old work experiences to break the strike, Johnston Press has had two University Students manning the editorial department on and off over the past three weeks.
One is Tom Bills – by happy coincidence the son of South Yorkshire Newspapers Managing Director John Bills. This is the same John Bills who yesterday refused again to negotiate or even speak collectively with the NUJ while the strike continues.
The other is Tom’s mate Jack Rees.
Tom Bills indeed confirms several times on his Facebook banter that he has been “workin in a newsroom in doncaster, av been for a couple of weeks! Its reaaaaalllly goood! ;) x” - presumably without a hint of sarcasm.
It seems he and Jack enjoyed themselves at first, maybe even more than could be expected. On one of his first mornings at work on Monday July 18th Tom asks his 586 friends “is it bad that I found the word 'erection' funny at work in a story about a building being built?!! :D”
Sadly, the task of bringing local news to the Doncaster and South Yorkshire community clearly wasn’t something that really inspired Tom or Jack in the longer term.
By the following Tuesday July 26, as he mans the newsdesks some 24 hours from the Doncaster Free Press deadline, Tom reports he is: “sooooo bored at work I've actually started look at the clock more than my computer screen!”.
Jack joins in on this thread with his own unique insights on their work and how to dispel the boredom: “nothing get a man erect like doncaster editorial. lets toss each other off”.


Jack particularly is clearly unimpressed with what he is doing: “well work is where i want to be in this mood wahhhhhhhh” the next day at 9.48. Less than two hours later, in desperation, he asks his 525 pals: “can u listen to ur ipod in a newsroom wen ur sposed to be workin?”


There’s more on there if you're quick. If the boys eventually clock on to this and change their privacy settings so the entire world can’t see their facebook status updates, then contact us for the multitudinous screengrabs we have saved for posterity. (UPDATE 20:00 - screengrabs now available below as Tom Bills has blocked his wall from view - although the individual links on here still work!)


Ultimately it’s good to know Tom’s not doing the strikebreaking out of any anti-union ideology or because his dad has forced him into it. He informs everyone he is: “just thinkin of the dollar atm!"
Presumably Tom and Jack aren’t getting anything near the 10 million shares the new chief executive of Johnston Press will be when he deigns to take up the reigns of the beleaguered group in November.
But they have both clearly been paid to work at the same time as experienced and skilled journalists lose their jobs through no fault of their own. The placards, vuvuzelas, theatrical productions in the street, not to mention the extensive local media coverage shouldn’t have escaped their attention, so they knew full well they were breaking a strike that has a huge impact on peoples lives.
The deeper and more serious aspect to this is John Bills’ judgment. Why did he employ his own son and his friend to work in editorial when neither appear to have any journalistic training or experience, then allow them to sarcastically spout forth on facebook belittling the newspapers he runs? It reinforces the belief held by the NUJ that John Bills cares not a jot about the editorial coverage in the newspaper, or even the reputation of the papers.
Had any ordinary NUJ member been caught mouthing off on facebook in the same way, they would have almost certainly been sacked for bringing the company into disrepute. So seeing as John Bills is ultimately responsible for employing his son to sit in the office and mouth off about how crap it is working at the Doncaster Free Press, surely Johnston Press directors should be seriously questioning his suitability for running a newspaper group.
As the full-time officer covering the action, I have come to know the members on strike very well over the past few weeks. I know they are doing this as a last resort to save the papers they love and respect. One journalist told me yesterday how the hardest thing about striking was how he missed the actual day to day work and reporting the news that matters.
It's a shame Johnston Press doesn't seem to value this dedication and professionalism, choosing instead to throw money at the children of the bosses who proceed to ungratefully sit and publicly slag off doing the jobs our members love. 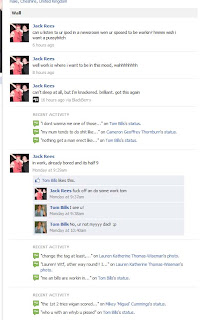 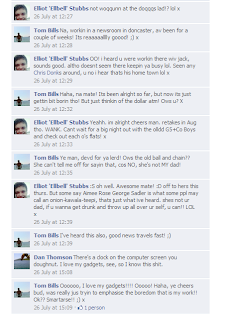 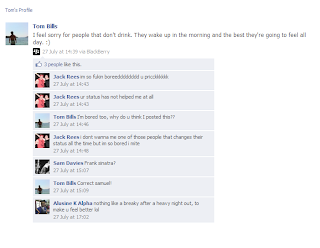 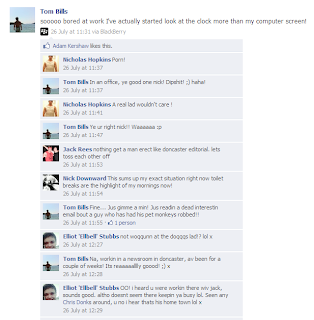 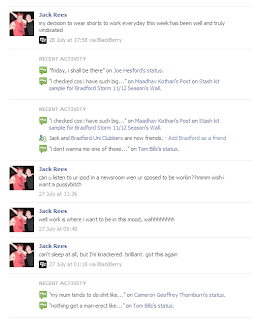 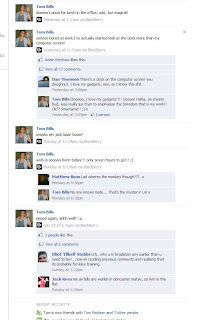 SCABS! Should be ashamed of themselves.

Let that be a warning to people to keep their Facebook stuff private in future. I'm assuming that these guys are just typical teenagers with a typically juevenile mentality. It's not much different from the usual banal dross commonly posted on many Facebook walls. However (and it's a big however) doing this while supposedly draughted in to do a professional job is VERY bad practice indeed; totally unprofessional.

From what I've read of Johnston press, unprofessionalism and general bungling is deeply ingrained into the culture.

Good luck to the strikers, and may they achieve swift and unconditional victory.

There are some good 'work experience' staff you know, in fact there are plenty on the various websites advertising 'free labour' i.e. keen kids who just need relevant experience to get a job. Most aren't sons and daughters of moguls though :)
Some good advice here: www.prospects.ac.uk/work_experience.htm and a good website here: www.experienceworks.co.uk